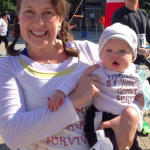 I can vividly remember the first time I wanted to eat while I was pregnant. I was about 18 weeks along and had had my PICC line since about week 12. I had lost close to 30 lbs. in the pregnancy thus far, and the most I had been able to eat at any given time was a handful of popcorn or an apple slice. During my first hospitalization of 11 days it took me 72 hours to eat a tiny bowl of dry AppleJacks cereal. But here I was at 18 weeks, lying on my parents’ sofa bed with TPN coursing through my veins, and I DESPERATELY wanted a bite of pizza. Just one bite. I wanted to taste it. My shocked parents and husband quickly ordered a pizza and we all hoped that my “window of opportunity” wouldn’t close before it arrived. When it got there my mom slowly, cautiously brought me a slice. We all knew that nothing I ate would stay down, but I took a bite anyway. And it was the Single. Most. Spectacular. Thing. I. Had. Ever. Eaten. I had never tasted anything so amazing in my life. I started crying before I had even gotten a chance to chew. “Oh my God, it is so good!” I sighed, with tears running down my face. About 4 minutes later I ran to the bathroom to be sick, and when I returned to bed I looked my mom straight in the eye and said, “If I make it through this, and the baby makes it through this, and everything is ok in the end, I swear to you and to any god that is out there – I will NEVER complain about my weight again. Even if I gain 200lbs. after this, I promise I won’t care. I just want to eat again.”

Thankfully, everything did turn out ok in the end. The next 21 weeks were still incredibly difficult, but eventually I was able to come off of the PICC line and eat and drink enough to sustain my son and me. He was born happy and healthy at 1:56pm on October 22, 2012, and at approximately 5:00pm I ate a huge cheeseburger and two plates of fries. It was the first time in 9 months that I had no nausea while eating. Thus began my year-long quest to make up for lost time and eat every delicious thing I could get my hands on.

The American Psychological Association has an interesting article entitled “The Psychology of Hunger” by Dr. David Baker and Natacha Keramidas. The article discusses research conducted during WWII on what happens when a human goes into starvation mode. Thirty six American males volunteered to spend months steadily decreasing their caloric intake so that doctors could note the changes to their bodies and minds, in the hopes that the research could help those starving in war-torn Europe. The part of the article that really jumped out at me stated, “During the semi-starvation phase the changes were dramatic. Beyond the gaunt appearance of the men, there were significant decreases in their strength and stamina, body temperature, (and) heart rate. The psychological effects were significant as well. Hunger made the men obsessed with food. They would dream and fantasize about food, read and talk about food and savor the two meals a day they were given. They reported fatigue, irritability, depression and apathy.” Huh. Sound like anyone you know?

HG caused me to be OBSESSED with food. I thought about it 24/7, even when the mere thought of food sent me scrambling to the bathroom to be sick. I couldn’t watch commercials with food in them, yet I so desperately wanted to eat. I couldn’t even hear someone say the word “chicken” without being sick (I actually forced my family to refer to it as “pigeon” in front of me. Because somehow that made it better?), but I would have traded a kidney for the ability to eat a chicken sandwich. During one of my hospital stays my husband told me he was going to leave the room so that I didn’t have to watch him eat a candy bar. “No,” I said firmly. “Stay here and eat it. I want to watch.” My husband, bless him, let me creepily watch him eat it. He started taking big bites and I shouted, “No! Slower! I want to watch the caramel.” He finished the candy bar, and I frantically reached for my pink emesis bowl.

Needless to say, in the year after I had my son I LOVED food. I revered food. I worshiped it. I savored every single bite of all of the delicious things I had been deprived of for so long. A second piece of chocolate cake? Count me in! Triple helpings of fettuccini alfredo? Absolutely. Second dessert of the night at 12:00am? Don’t mind if I do.

Suddenly I found myself 50 lbs. heavier. And I forgot all about my promise to myself, my mother, and the universe.

I began to hate the weight I had put on, but I couldn’t stop eating the things I knew were causing the weight gain. It was like a compulsion. I had to eat whatever I could whenever I could, because deep down a part of me was still so scared that if I didn’t, I would start to starve again. During HG I had felt my body shutting down, literally dying of hunger and thirst. I had felt my brain synapses misfiring from lack of nutrients, and I had seen my ribs poking out when I should have had a cute pregnant belly. I never ever wanted to feel that again. And if that meant eating as much as possible, then so be it.

This got a bit more difficult when my son was about 5 months old and I made a lot of friends who were also new moms with babies around the same age. These women had all had normal and, for the most part, uncomplicated pregnancies. All of a sudden all anyone wanted to talk about was “losing the baby weight.” Everyone, it seemed, was on a diet. We would go out to lunch and I was the only one that would order the triple bacon burger with curly cheese fries on the side. Everybody else ordered salad. I downed iced tea, soda and coffee. They drank water. They steadily lost weight as I steadily gained it. I began to feel guilty, as if I wasn’t playing my part correctly. After you have a baby you are supposed to lose weight, right? It is what all of the ads for gyms and diets say. My post-baby weight gain seemed to be just another part of this bizarre, upside-down HG pregnancy that still caused me to feel so different from everyone else. My friends were looking slim and beautiful and chatting about their exercise routines. I couldn’t exercise because any exertion caused me to feel nauseous, which caused me to feel uncontrollable panic. But how to explain this to someone who has never starved before? In our society, women are “supposed to” have the baby and then immediately criticize themselves for the weight they have put on. Then they are supposed to feel so fat and ugly that they whip themselves into shape. But I couldn’t bring myself to forgo the food that I had once begged and screamed and cried to be able to eat.

When my son was a bit over a year old I started to finally feel strong again. I began walking a few miles a week. Then I started lifting light weights at the gym. A new Vitamix purchase caused me to start drinking fruit and kale smoothies. And just like that, without really trying, the weight that I had put on over the year began to come off. But I didn’t start eating differently and exercising because I was trying to lose weight. I did it because I wanted to prove that HG hadn’t gotten the better of me. I wanted to show myself that I could be the physically and mentally strong person that I was before it. Most importantly, it was around this time that I realized that I wasn’t like my other mom friends, and never would be. I had experienced something so horrific that it had altered my life. And yet, out of that horror I received the greatest gift – my son. I stopped comparing my story to the stories of my friends, and began to focus on the fact that I was alive and well and a mom to a beautiful boy.

If you are 1 month, 6 months, 5 years or 20 years post partum from an HG pregnancy, I have one request: Be kind to yourself. Recognize that you literally crawled through Hell, clawing and scraping and scratching to leave it. You might have physical scars from PICCs, ports, or pumps like I do. Wear those scars as badges of honor. You might be 20lbs., 50lbs., 100lbs. or more heavier than you were before HG. It’s ok. That means you can eat. You can drink. You are ALIVE. Your body will let you know when it is ready to start its recovery. Until then, remember the promise that I am sure every one of us made to ourselves, our mothers, and the universe. Then look at your children and know that you did it for them. 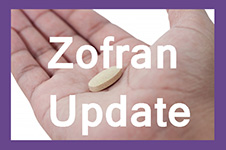